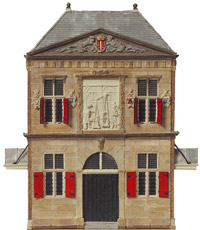 Jerry Harberink is autodidact. There isn’t any training for the kind of work he makes. The creation of a miniature gable , in wood, plaster or any other building material asks for an immense experience and know how in combination with a great feeling for architectural proportions that simply cannot be learned at an academy.
After his college time and a partly finished Textile High School Harberink went into the military service and immediately started writing a book about his experiences as a private soldier, published after his army time. In order to avoid problems with his former superiors.

He started as a deejay at a private radio station, formed his own cabaret group and lived on a cloud till he became more serious and started his own firm in textiles, with unpredictable success.

However all the time his heart went out to architecture, in a general sense. But drawing was not exactly his favourable talent and mathematics was a complete disaster. So a bright future in the field of architecture was not directly visible. But in his heart he remained an artist, with an urge to create.

And the blood must have its course…
So he gave up his career and started his present work. The artistic representation of a piece of architecture. In his way, from waste materials. In a miniature version, in the original building materials.
A complete gamble. Nobody did this kind of work, so there was no market for it . It did not exist. But finally success came.
And nowadays besides taking care of his own collection most of Harberink’s work is on commission. That can be the old farm of the grandparents in its original version or a seventeenth century town house. Meanwhile with his own collection of miniature facades exhibitions are regularly organised.